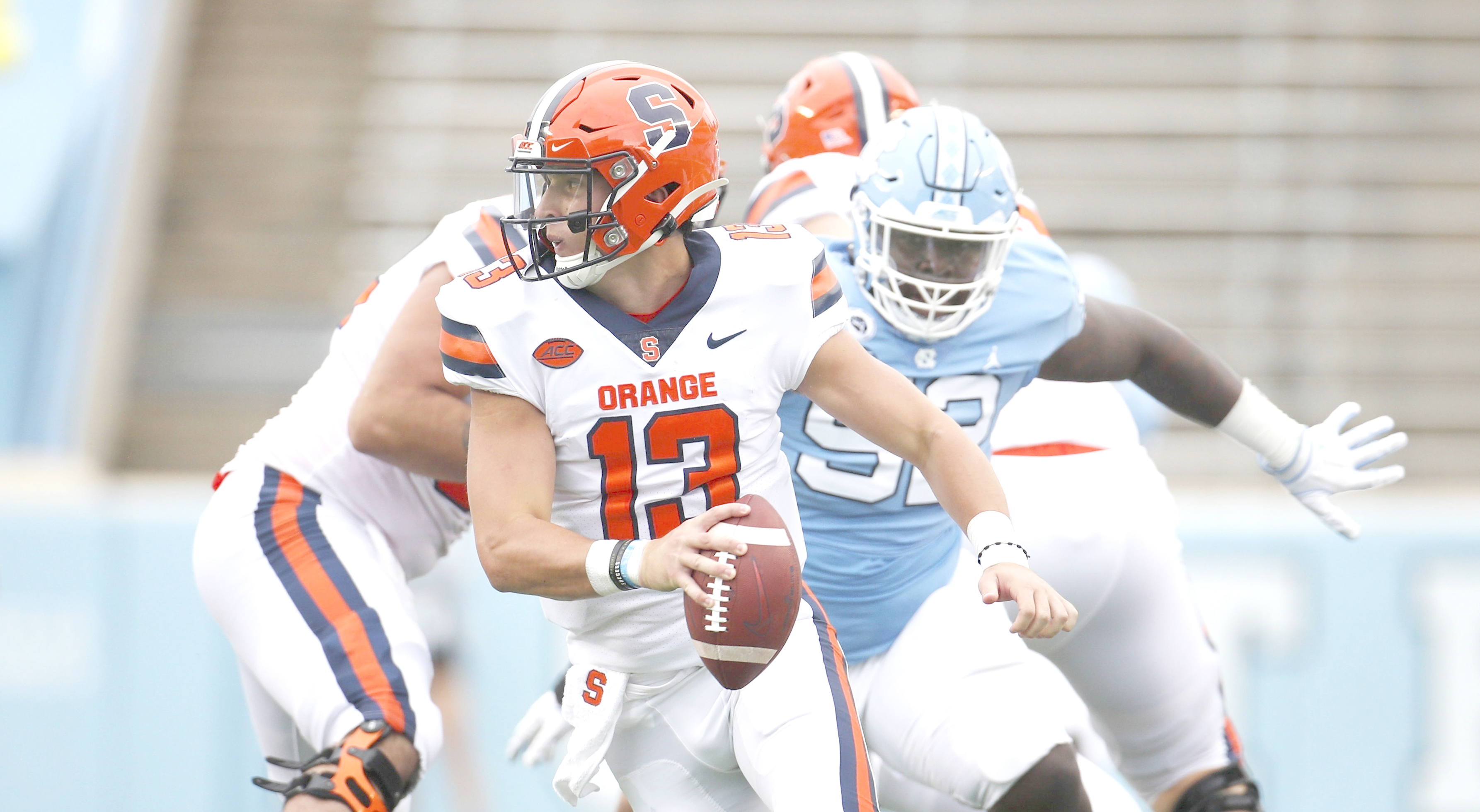 One game into the season, Syracuse coach Dino Babers isn’t sure what kind of team he has.

It likely won’t take long to find out.

The Orange dropped their season opener 31-6 at No. 18 North Carolina on Saturday and now play at No. 25 Pittsburgh (1-0, 0-0 Atlantic Coast Conference) in five days. The Panthers are coming off a 55-0 season-opening win over FCS foe Austin Peay.

“I think it’s a good test,” Babers said Monday. “When you play North Carolina and how active their linebackers are — those guys can flat go — and their down linemen are very, very skilled. Now you’re coming back and you’re probably playing, outside of (top-ranked) Clemson, maybe the next best defensive line in the conference, so I think it’s a really good test to find out exactly where we’re at, and it’s not going to get any easier.

The opener didn’t go so well when the game was on the line, and it included a good share of gaffes by the Orange — a botched 29-yard field goal attempt by Andre Szmyt, a dropped pass in the end zone by a wide-open Sharod Johnson, three straight three-and-outs by the offense in the decisive fourth quarter, and all those sacks.

Too much to give star North Carolina quarterback Sam Howell, even without fans.

“A lot of times we shot our own selves in the foot,” Babers said. “That’s a good football team. We knew we had to really do things right to win down there in that situation, but I thought for three quarters it was a heck of a football game. We just left too much meat on the bone.”

Babers said the effects of the coronavirus pandemic affected Syracuse’s uptempo offense led by redshirt junior quarterback Tommy DeVito. The decision by the team’s top two running backs — Abdul Adams and Jarveon Howard — to opt out of the season set the team back a lot. Their replacements — Jawhar Jordan and Markenzy Pierre — averaged 2 yards a carry on 19 attempts as Syracuse never established any sort of ground game against North Carolina’s tough defensive line, finishing with 68 yards led by DeVito with 30 on 16 attempts.

When DeVito and the players returned to campus, summer workouts began in pods of four because of the coronavirus, making the preseason that much more difficult. And injuries along the offensive line led to a position switch for defensive lineman/tight end Chris Elmore, who played guard for the opener.

“He (DeVito) has not had a scrimmage or a game since the Boston College game last year (November),” Babers said. “He got a certain amount of plays in August. We had nothing in March and I think that the throwing game is the thing that gets left behind because they didn’t have an opportunity with the pod situation to practice the way they normally do in the summer. Any time you have drops ... those are mistakes that happen when you don’t scrimmage enough and you don’t get your game time in. I would expect it to be drastically improved going in to this game.”

New offensive coordinator Sterlin Gilbert ran several four wide receiver sets and the tight end position, normally an important element of the offense, was not a factor, a departure for a team that has a history of excellence at the position. Syracuse was outgained 463-202 and DeVito finished 13 of 31 for 112 yards with zero interceptions, extending his personal streak to 201 consecutive passing attempts without a pick, a Syracuse record and the second-longest streak among active FBS quarterbacks.

As for the 3-3-5 defense installed by new defensive coordinator Tony White, it kept the game close for as long as it could, producing three turnovers (two interceptions and a fumble recovery) to give the offense a chance.

“I just thought that the defense was out there too long,” Babers said. “They were playing extremely well and let’s give them something to play for. Let’s get them some points on our side of the scoreboard and make sure that it’s a contest.

“We left some plays out there. We’ve got to make some of those plays to take the heat off.”

NORWICH – Chenango Valley Home has started a new venture of growing massive pumpkins as a way to bring some ..
September 17th

NORWICH – Residents from Guernsey Street and Henry Street in Norwich came together at the City of Norwich Common Council ..
September 18th