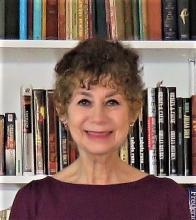 A short story by Shelly Reuben

Hyacinth was 20 years old when she went to work at Tennyson’s Department store. With her flawless brown skin, amber eyes, and impossibly lush eyelashes, she was a perfect advertisement for the beauty products that she sold.

Over the years, she frequently changed designer brands - one year selling Chanel; another Clinique, Elizabeth Arden, or Estée Lauder, but sixty-years later, her auspicious career ended exactly where it had begun: Behind a cosmetic counter at Tennyson’s.

When she was very young, Hyacinth’s last name was Pawley; after she married Ralph Drew, she became Mrs. Drew. Her father, a mechanic for the Transit Authority, raised her alone after his wife was killed by a runaway car. He adored his daughter, and he believed that she was a genius.

“Honey,” he crooned, “you’re smart, you get good grades, and you can be anything you want. A doctor. An astronaut. Even president of the United States.”

Hyacinth kissed him on the forehead, patted his hand, and said, “But that isn’t what I want, Daddy.”

“What then?” he asked, not caring if she was a physicist or a dog catcher, as long as she was happy.

“I want to sell beauty products.”

And the very next day (it was four days after her high school graduation), she applied for and got a job in the cosmetics department at Tennyson’s Department Store. Attractive, poised, well-dressed, and stunning, Hyacinth genuinely cared about matching her customers with products that would show them off to their best advantage.

She and her husband never had children, but neither seemed to regret the lack. Ralph was a sweet-natured man who had been a fireman for twenty years before he became a pharmacy assistant. In fact, they had met at his pharmacy when Hyacinth was picking up a prescription for her dad. It was love at first sight for him, but more a process of an erosion for Hyacinth, although she eventually succumbed to his unrelenting devotion.

As a couple, she and Ralph were happy. Once a year, the Drews took a two-week vacation; sometimes on a cruise; sometimes with a tour group to Europe or the Far East. And occasionally, to a luxury hotel in town where they just ordered room service and watched old movies on TV.

During her sixty years of selling cosmetics, Hyacinth had been what is called a “valuable employee.” She’d been matron of honor at the weddings of four co-workers, godmother to the children of six, and a shoulder-to-cry-on for countless young people who came and went. She gave advice, lent money, dried tears, and even babysat – but only if it was a life or death emergency.

Ralph retired from the pharmacy when he was 72-years-old, and for the next three years, he took over their kitchen and became an excellent cook. He died of a massive coronary when he was 75.

I met Hyacinth several years after that. She was in her early 70s at the time, and with hair like spun glass and skin as creamy as a chocolate kiss, she was still amazingly attractive. She was also blessedly nonjudgmental about one as ignorant of makeup as I.

I was at an odd stage of my life at the time. After years of literary anonymity, one of my books suddenly took off and was nominated for a prestigious award. I wanted to look my best at the awards ceremony, but I didn’t have a clue about what to do. I had been wandering in a daze among counters in the cosmetics department when a beautiful older woman asked if I needed help. After I nodded “yes,” she promptly took me in hand, and during the hour or so that I spent with her – I think it’s called a “makeover” – this miracle worker with lipstick, eyeliner and blush turned me from a duckling into a swan.

Now, almost twenty years later, I still have the foundation mousse and face powder that she sold me on that day; and word-for-word, I still remember the conversation that made us friends.

“What’s your name?” I asked, expecting her to respond that it was Mrs. or Miss so and so.

She did not. Instead, she said, “My name is Hyacinth.”

“Hyacinth!” I exclaimed. “I’ve never met anyone before who was named after that flower.”

She looked at me blankly. “Flower?”

“Yes. Of course. Hyacinths are pink or white or purple, and other than crocuses, they are the first flowers that bloom in the spring. And they smell like heaven.”

The expression on her face did not change.

“Didn’t you know that you were named after a flower?” I asked.

Her eyes locked quizzically with mine, and she shook her head.

In the years that followed, I bought many lipsticks, eye shadows, and moisturizers from Hyacinth, often stopping at her counter to chat even if I was in the store to buy gloves or blue jeans. And during that time, I had always meant to ask her how it was that her father never explained the origin of her name. But I forgot.

I had also intended to bring her a potted hyacinth during one of my visits. I forgot to do that, too.

I was in London on a book tour when the worst happened. I had returned home and gone to Tennyson’s to say hello, but instead of seeing my friend behind the counter, a co-worker –Cindy – informed me that a week earlier, Hyacinth had been wrapping a bottle of Youth Dew for a customer when she suddenly clutched at her chest and fell forward. Cindy called for an ambulance, but half an hour later, Hyacinth died.

I missed the funeral, but I still wanted to visit her grave.

I had a manuscript deadline, and it was winter. Then I had a book tour, and it was summer. I was guest of honor at a book symposium, and Hello Autumn. Next came winter, another deadline, and when I finally looked up, it was spring, again and I realized over a year had gone by and I still had not paid my respects.

That same afternoon, I was walking past a florist’s shop and – wham! – I was hit by an intoxicating scent. I looked down and saw a bright pink flower with hundreds of tiny petals protruding perkily from a small foil-wrapped pot. It was a hyacinth.

I snatched it up, jumped into my car, and drove 45 minutes to the cemetery. Fifteen minutes later, I located my old friend’s grave

I never found out who chose the inscription for her headstone, but it was so, so right.

A Flower named after a flower.

I placed the potted plant on the grass at the base of the headstone, and started to walk away.

And to this day, I don’t know which came first.

My smile. Or my tears.

Copyright © Shelly Reuben, 2018. Shelly Reuben’s books have been nominated for Edgar, Prometheus, and Falcon awards. For more about her writing, visit www.shellyreuben.com

A shop of treasures opening in Norwich