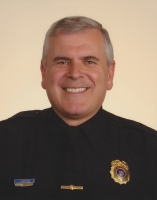 At this very moment thousands of police officers from the United States, Canada and many other parts of the world are gathering in Washington D.C. for Police Week 2018.

The law officers gather annually in our Nation’s Capital to remember and enshrine officers killed in the line of duty from the previous year.

President Kennedy in 1962 proclaimed May 15th of each year as Peace Officer Memorial Day. Over the years the ceremonies outgrew a single day and the activities expanded to a full week, now known as Police Week. May 15th remains the actual day of observance and is one of the handful of days on the calendar when the flag of the United States is flown at half-mast.

There is another group of people gathering this week in Washington, the Survivors of the Shield. These are the spouses, parents, siblings and children of slain law officers. The families of cops killed in the line of duty endure a pain that lasts a long, long time. After the initial shock of having their loved one taken in an untimely manner, the family must endure years of more pain. This is caused by the death investigation, followed by court appearances, appeals and the unwanted media publicity and exposure.

Recently families of slain New York police officers had to withstand all the pain again when the Parole Board released from prison the people convicted of killing their loved ones. The families of slain officers are unbelievably stoic and strong. Seldom do they show their emotions to outsiders. While they are in Washington the families are kept sequestered in their own hotel where, surrounded by other survivor families, they can release all of their tears and fears.

The events in Washington begin with a Blue Mass and memorial service followed by a solemn nighttime candle light vigil which is a spectacle to behold. Tears flow from the most hardened of officers at the Police Memorial as a bright blue laser light is turned on and pointed toward the sky while bagpipes play Amazing Grace. The symbolism of the laser’s ‘thin blue line’ streaking heaven bound for eternity is more than appropriate.

Sadly, the most recent FBI reports indicate that so far in 2018 there have been 23 law enforcement officers who’ve been fatally shot compared to 14 for the same period in 2017. This doesn’t include the dozens who died in accidental line of duty incidents such as car accidents, falls, drownings, heart attacks and even electrocutions.

The nationwide felonious attacks and assaults on police officers are taking a toll on all cops. Last month two Florida sheriff’s deputies in a rural county were ambushed; shot dead through a restaurant window for no other reason than wearing a uniform. Adding to the physical danger is the mental anguish caused by the barrage of negativity and constant scrutiny making a tough job even tougher. Most recently criminal gangs have made threats to assassinate officers on Long Island, NY and in the Rochester area. More officers are now retiring at the first opportunity and adding to the vacancy dilemma is fewer people interested in being a new recruit in public service.

In our area law enforcement officers enjoy support from a majority of the population whether the officer’s uniform is gray, blue, black or green. This support is displayed in many ways; citizens reporting crimes and suspicious activity, offering information when asked, sometimes even assisting a lone officer taking a criminal into custody. Only a tiny fraction of the local populace would ever want to harm an officer, but it only takes one.

Cops lead dangerous and thankless lives. They do all the things you know need to be done, but don’t want to do yourself. Do you want to wade into a crowd of drunks fighting in front of a bar? Would you crawl through the broken window of a burglarized building looking for a criminal at two in the morning? Could you calmly face down a disturbed person wielding a knife while the family is screaming? How many would take a job that requires carrying a firearm and wearing body armor? Even if the job isn’t your cup of tea, you can support law enforcement with a simple and cordial ‘thank you’. Those are words not often heard by the women and men on patrol.

If you make a trip to our Nation’s Capital to see the museums, monuments and war memorials, please make your way to the 400 block of E Street NW, just a short distance from the Hard Rock Café. At the National Law Enforcement Officers Memorial you will see stone lions guarding the entrance to 608 feet of polished granite walls with carved names of over 20,000 U.S. law officers who died protecting their communities. There are some other words carved in those granite walls that remind observers “It is not how these officers died that made them heroes, it is how they lived.”