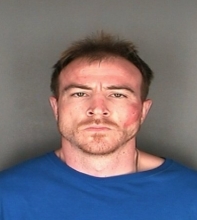 NORWICH – A parolee sits in the local jail without bail, standing accused of possession of heroin and assault of a local detective.

28-year-old Joshua A. Shurock, of Norwich, was arrested Thursday.

The Norwich Police Department’s Detective and a uniformed officer approached a subject following receipt of a tip while on Court Street, said police. Upon approach, it was reported that the individual ran, resulting in a foot chase.

Police said Shurock was taken into custody after a brief struggle.

The criminal possession felony alleges that Shurock knowingly and unlawfully possessed pre-packaged heroin with the intent to sell it.

The assault charge alleges that Shurock – with intent to prevent a police officer from performing a lawful duty –  caused physical injury to said officer.

The misdemeanor charge accuses the defendant of attempting to prevent a police officer from effecting an authorized arrest.

The detective who sustained physical injury during the encounter was treated at UHS Chenango Memorial Hospital and has been released.

Shurock was arraigned in Norwich City Court before Judge James E. Downey and was remanded to the Chenango County Correctional Facility without bail.

He is set to reappear in court at a later date.

Shurock is presumed innocent until found guilty in a court of law.