A Mourning Community Says Goodbye To Its ‘Better Half’
Published: August 12th, 2015
By: Shawn Magrath 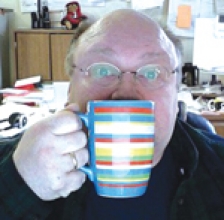 SHERBURNE – After four decades of being taught to laugh even at inopportune moments, the Chenango County community today mourns the loss of funny man Randy Glasbergen, an internationally respected cartoonist whose witty humor brought light to millions of readers.

Praised for his success as a freelance cartoonist, Glasbergen is among the most published humorous illustrators in the country, having had his work appear in books, newspapers, magazines, greeting cards, calendars and several other media platforms. He is perhaps most notable for his uniquely dry humor approach to sensitive issues – everything from relationships, to family life, to finances.

As a longtime resident of Sherburne, Glasbergen’s impact on the local community became clear on Tuesday as social media exploded with news of his passing, along with posts of peoples’ favorite Glasbergen illustrations.

Have a Witching Good Time at 7th annual fundraising event

NORWICH — The Witching Good Time fundraiser is returning to Rita's Tavern for their seventh year on Saturday, October 1 ..
September 29th

Celebrate the Spirit of the Wolf on October 9

For the Health of it: SIDS Awareness Month

Learn to use Ebird with the Chenango Bird Club