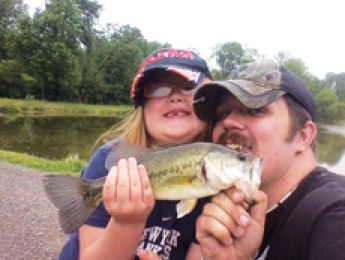 We have all seen parents that would rather sit their kid in front of an electronic babysitter than take the time to get them outside. This trend is on the rise, although a lucky bunch of kids will still get to see what a pond or hillside look like.

Good parents make sacrifices and give up their pastimes to raise a child. When it comes to single parents, nearly everything has to take a back seat, and I have always been inspired by a single mom or dad. The challenges they face are beyond my comprehension, and I can only hope I would do as well. For parents with split custody, the challenge tends to be harder. Between time away from their child and having to reconnect weekly, many struggle with the task. I was fortunate enough to be introduced to a dad this week that has done well juggling the split custody lifestyle. He has found, as many others, that the outdoors is the best place for a father and child to bond.

Alan Hitt was raised in Plymouth and went to school here in Norwich. Alan spent his time as a kid fishing and playing outdoors with his twin brother, Adam. The boys have been fishing as far back as they can remember, and can thank their mother for helping them get involved. As most parents giving an unattended child a nice fishing pole have learned, it can end one of three ways. Either it will come back in two or more pieces, find its way to the bottom of the lake, or catch the biggest fish around. It's not uncommon for beginner’s luck to strike and have your child come back with a monster, but it's much more likely you will have to buy a new rod. For this reason, Alan's mother, Michelle, sent them out with a stick pole. Much less costly, and easy to replace for the hard-working parent. Many, including myself, fondly remember the old stick pole days.

Alan has now grown up, and has a daughter of his own named Taylor. She was lucky enough to have a dad that likes to fish and wanted to pass it on to her. She has been fishing with dad since she was about two years old. Taylor caught her first fish on a Dora pole, and refused to use the baby pole the next year. She convinced Alan to take her to the store and let her a pick out a big-girl pink pole. Alan is a single father with joint custody, and expressed how hard it was being away from his little girl half of the time. He also said how happy he was that she enjoyed fishing so much. Fishing allows more interaction with your child than nearly any other activity, and when your child asks to go, you have been blessed.

Taylor is now six and is starting to show signs of growing up and becoming independent. Alan told me how sad it was when on their last outing, she decided to bait her own hooks. He said, “You think you don't want to bait a hook until they ask to do it on their own.”

This is the fisherman's way of knowing your baby is growing up. Bittersweet was the moment they shared!

Taylor is now able to do everything by herself, and also caught her first bass this past trip with her personally baited hook. Alan had a hard time expressing how much the moment meant to him! As with most parents, he thrives on his child's accomplishments, and is in awe with her ability to learn. He told me how they were making a journal of tree species and collecting leaves of each one. After her first outing they returned to the woods and to her father’s surprise, she pointed one tree out and identified it. She said, “That's a basswood, the leaves look like elephant ears.” She was spot on and had made her own comparison to remember the tree. She continued to name many other trees to further impress her dad.