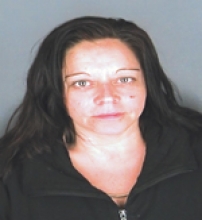 NORWICH – The female co-defendant in the $5,000 heroin drug bust case from last spring changed her plea and was sentenced on Nov. 10 in Chenango County Court before Judge Frank B. Revoir, Jr.

Lynn M. Minck, 45, Norwich, was charged on May 28 of this year with criminal possession of a controlled substance in the third degree (with intent to sell), a class B felony, and criminal nuisance in the first degree, a class E felony.

Minck changed her plea of not guilty and pleaded guilty to criminal possession of a controlled substance in the fifth degree on, which was reduced from the original class B felony to a class D felony.

Minck and her boyfriend, John A. Zangari, 51, Norwich, were pulled over by the Norwich City Police Department last May at 5:35 p.m. on Rexford Street in Norwich on their way back from New York City. They were stopped and searched following a joint investigation by the NPD and the Chenango County Sheriff's Office.

It is alleged she and Zangari possessed 40 glassine envelopes of heroin in their rented Ford Focus, which they intended to sell.

NPD also searched the couple's house on 28 Fair St. in Norwich. The officers found $5,000 worth of heroin in total from both their rented vehicle and their apartment. All drugs, monies and the couple's personal vehicle were seized.

District Attorney Joseph A. McBride asked Minck to answer questions about her involvement in bringing “large quantities” of bundled heroin into Norwich.