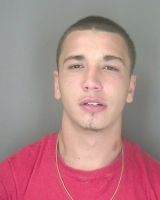 NORTH NORWICH — A Utica man is being held at the Chenango County Correctional Facility in lieu of $25,000 cash bail following a traffic stop in the Town of North Norwich.

On Thursday, Henry was the passenger of a vehicle that was returning to Utica when he was arrested for criminal sale of a controlled substance in the third degree, a class B felony. Authorities say Takell S. Henry was arrested for selling crack cocaine to an undercover police officer during the month of July.

The driver of the vehicle was not charged.

Henry was arraigned in the Town of North Norwich and will appear again in court for a felony hearing at a later date.

Investigators with the Norwich Police Department assisted with the investigation.

“We are using every means available to us in our efforts to locate and arrest those who sell this poison in our communities,” said Undersheriff Daniel Frair.