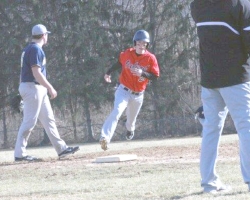 HARPURSVILLE– Oxford started off Wednesday night’s game against Harpursville by batting around, scoring eight runs and went on to win 18-6

“We got off to a great start,” said Oxford varsity baseball head coach Chris Palmer. The Blackhawks had ten hits and three errors and have started the season 2-0 with impressive victories. Kyle Crawford started the scoring in the first with a bases loaded, two out, two run double. “He opened the flood gates for us,” Palmer said. Crawford went 3-4. While the Harpursville Hornets had nine hits, Oxford pitcher Cameron Heggie was efficient in his first outing of the season. He gave up two runs in the first inning after three hits and an error but 77% of his pitches were strikes. “the pitching has been there,” said Palmer. Reliever Austin Crawford came into the game in the sixth inning and also threw a strike percentage of 77%.

Oxford has been scoring runs at will to start the season and will play tomorrow at defending league champion Unatego. “We haven’t been striking out a lot. We put the ball in play. Tonight we bennefitted from a couple of errors. We walked twelve times and they committed six errors but we also pounded out 11 hits,” Palmer said, “It was great getting out there for a second night, they at are looking good right now.” The Blackhawks face their first challenge of the season at Unatego, throwing the third pitcher in their rotation against a team perennially at the top of the league.

BAINBRIDGE– The Bainbridge-Guilford pitchers struggled with control, giving up 15 walks in Wednesday’s game, allowing four runs in the seventh inning to fall to Deposit 8-3.

The game was tied 3-3 going into the sixth inning and the Bobcats gave up four walks and base hit to load the bases. Coach Mattingly made a pitching change, bringing in reliever Lucas Butcher.&#8200;Deposit’s number seven hitter hit an infield pop up to short and an error scored the runs. B-G had three errors in the game, Deposit had two. “We gave up 15 base on balls and that was tough,” Mattingly said.

The Bobcats travel to Hancock today, Walton on Friday and meet Deposit again in a non-divisional doubleheader on Tuesday, April 22.

HARPURSVILLE– Harpursville’s Erika Whitney threw a no-hitter at home in a 15-0 rout of Oxford on Wednesday.

Whitney had nine strikeouts and one walk in the Hornet’s second game of the season. “If you see Erika Whitney pitch, she lifts up to the sky and goes all the way to the ground and then comes up... her motion in general may have thrown our batters off a little bit,” said Oxford varsity softball head coach Heather Pizza. The Blackhawks struggled with the cold weather and the field conditions. “We’ve been practicing on a skinned infield, this was a grass infield, the ball was bouncing,” Pizza said. The Blackhawks had six errors in their first game outside with a young team that is just getting their legs underneath them. “We hit the ball but they seemed to find the fielders. We are working together as a new team, I think things will come together in a couple of games,” said Pizza.

Oxford pitcher Lorrin Parks had seven walks and seven strikeouts and gave up 11 hits to Harpursville. Blackhawks softball plays again today at Unatego, on the road against Deposit Friday and again at home against Walton after spring break on April 21.

HANCOCK– Hancock’s Cynthia Wormuth hit a grand slam, one of two Hancock homeruns as they went on to blank Unadilla Valley 22-0 on Wednesday night.

“They can just smoke the ball, we really didn’t have many errors, they just hit very well as a team. They got hits into the outfield and ran the bases, they bunted when they needed to get people around. We just couldn’t stop their hitting,” said Unadilla Valley varsity softball coach Hannah Johnson.

Hancock starting pitcher Lea Newman had seven strikeouts in three innings,&#8200;Hancock pitching totaled 12 strikeouts on the evening, allowing only one hit. “Lea throws hard and fast and she mostly throws strikes, we just couldn’t hit off of her,” Johnson said.

Unadilla Valley plays today at Sidney and at home against Afton on Friday.

BINGHAMTON– Norwich left runners in scoring position Wednesday for the final out, to narrowly defeat Seton 7-6 on the arm of Shannon Moore.

Norwich had ten hits and four errors, Seton had five hits and one error in the game. Purple Tornado pitcher Shannon Moore had eight strikeouts and three walks, she also had a few timely hits and scored two runs. Jordan Sanford went 3-4 with two doubles and four RBI on the night. Moore started the action in the fourth inning with a single, Kassidy Seary followed suit and Jordan Sanford drove both baserunners in with the first of her two doubles. In the sixth, Shannon Moore started the Tornado with a single, Seary again followed her lead and the reliable Sanford singled in another run. Stephanie Meyer, not to be outdone, singled in Seary for her first RBI. Richelle Seaman-Lawton had a sacrifice for her first of two RBI. The seventh started with Seary’s second double of the night, Jordan Sanford came through with yet another timely double that drove in Seary from second. Norwich final run, a Seaman-Lawton fielders choice that scored Meyer, turned out to be vital as Seton would score twice in their final at bat.

“We played good. The errors kept them in the game. Shannon had a couple pitches that didn’t work right and they had some timely hits that kept them alive in the end,” said Norwich varsity softball head coach Scott Moore. Wednesday night was only the Tornado’s second time on dirt all year and they are looking forward to playing the defending State champion Windsor Black Knights on Friday. Norwich is scheduled for two home games net week, the first against Owego on Wednesday April 16, and versus Susquehanna Valley on Saturday, April 19.

Final Saturday in the Park this weekend

City of Norwich announces trick-or-treating is on

‘Drug Take Back Day’ on Saturday in Greene and Sherburne

Trump, Biden fight over the raging virus, climate and race

‘Drug Take Back Day’ on Saturday in Greene and Sherburne