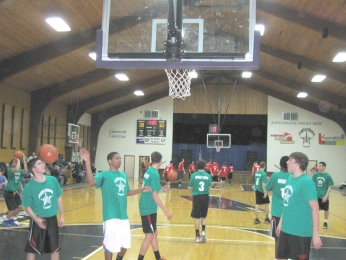 Team Burger King opened up hot, scoring seven unanswered points to start the game. Team Mirabito Energy narrowed the margin to six with 13:06 in the first half, after opening up their scoring with three consecutive three-pointers. With 11:30 in the half, Oneonta’s Albert Odero displayed a flashy dribble drive and finish to make the score 25-18. Norwich’s Storm Cook lurked around the perimeter and launched four three pointers in the first half, sinking one. Fellow Tornado, Michael Sutton scored the final points of the period, two of his four, and the score was 60-38, Burger King, at the half.

Team Mirabito Energy head coach Matt Osborne told his team before the game “to push the ball up the court and spread it around.” The idea was to make the other team work hard on defense but the local squad gave up a lot of size and struggled against the fast pace of Team Burger King.

“We got down early, they shot the ball really well. Early on we didn't get back on defense very well and that's why they got a lot of easy lay ups. That lead to them getting an early lead. But in the second half I thought we held our own,” said Osborne.

The second half success was mainly due to the scoring ability of David Dufresne and the unselfish play of Oxford sophomore Kevin Davis. With 15:40 in the second half, Davis dished on a fast break, which lead to an easy basket and made the score 75-46. Shortly after, Micheal Sutton picked the opposing point guards pocket and jumped out on the break. He was fouled on his attempt and made both free throws. Michael Oralls, of Norwich, got in on the action, scoring two with 14 minutes left in the half. The Norwich duo energized their team and after Kellen Komenda drained a triple, Team Mirabito was down only 20. That’s when DuFresne took over.

One three straight possessions, Unadilla Valley’s All-Star guard showed flashes of brilliance. 10:30 on the clock, he penetrates to the top of the key and rattles in a fadeaway. 10:10 on the clock, DuFresne pulls up from 17 feet and buries a knockdown jumper. Minutes later, the Midstate Athletic Conference’s 2013-2014 Player of the Year sank a three-pointer. “It's mad fun,” said DuFresne about the Stars and Stripes Classic, “I did it last year, and its pretty even sometimes. People are catching banks and shooting threes, you’re noticing people's specialties, crossing people over. It's pretty fun.” DuFresne will be leaving Unadilla Valley next year and moving to Florida but he took this opportunity to play with the friends he has made playing basketball in Section IV. “It's good fun. I'm with some friends and I meet new people. You’re playing with your ability. Normally during the season you're playing with kids from school, while here you're playing with people who are really talented and it's fun.,” said DuFrense.

With 6:55 left in the game, Team Mirabito Energy battled back, to be down 15. Oxford’s Kevin Davis found another awaiting teammate for an unselfish assist with 2:25 remaining. “I've got two more years so I might has well give the people who are done after this year a few more chances to score,” said Davis. With 20 seconds left in the game, Davis hit the floor and sprawled out for a loose ball. Although he was looking to pass not score, he came to play. “I was just doing what I do, hustling till the end,” said Davis. The 6-foot-four-inch sophomore has been managing basketball teams since he was a child and his love for the game shone through. “It's a really big honor to be here. especially when you're playing against these kind of athletes, that are going to college. People pick the team for you so you get to play with people who are as good as you and better. It’s just really good competition,” said Davis.