Oxford Says ‘thank You’ To Its Veterans
Published: November 14th, 2012
By: Jeanie Petersen 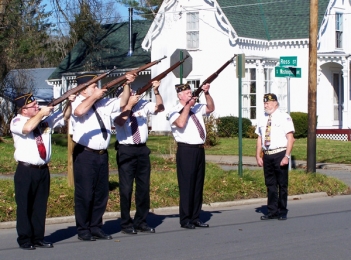 OXFORD – “Sometimes all that is needed is a simple ‘thank you’ directed at the veteran or the family member for his or her sacrifice.” stated Dale Dewey, Second Vice-Commander and Chaplain for the Oxford American Legion Fort Hill Post #376.

Saying “thank you” was the prevalent message conveyed by the Fort Hill Legion at the Veterans Day ceremony held at the traditional “eleventh hour of the eleventh day of the eleventh month.” Outside, the flag was half-mast; inside, a bell was tolled eleven times. The Post #376 Commander, Fred Baker, presided and Legion officers and guest Mayor Terry Stark made speeches. Legion family: Legionnaires, Auxiliary, and Sons of the American Legion and community members came to commemorate the services of veterans of all wars.

Guest speaker, Village of Oxford Mayor Terry Stark thanked the Oxford Post #376 for all the many important things they do for the community. He held an Oxford Review-Times from Nov. 8, and pointed to numerous events published that included the American Red Cross blood drive, the Band Boosters BBQ, the state Legion Commander’s dinner, and more …all held at the Legion.