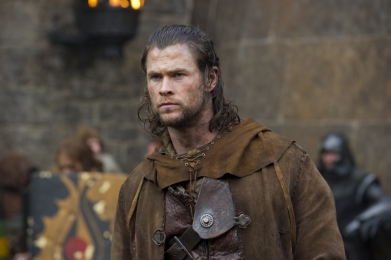 Weather gets a little crazy sometimes. Went to Colorscape on Saturday and was blown away by the wind and rain. The DVD Patrol is here no matter what kind of weather is in store. The Toddster got a little wet but that never stops him where movies are concerned. Even have a TV show in the mix too. Time to go!

Snow White and the Huntsman - Old stories are always coming up with new twists all the time. Snow White (Kristen Stewart) loved her mother and father very much. When she was a little girl, she lost her mother to a strange illness and it wasn’t long after her father fell in love with a mysterious woman (Charlize Theron). The new Queen has a plan and is also into magic. She is always checking to make sure she is the fairest of all and later learns Snow White is destined to take that from her and everything she has gained. So she decides to put Snow White into the deepest dungeon there is. Years later, she escapes and the evil Queen sends a huntsman (Chris Hemsworth) to fetch her. The huntsman doesn’t want to take Snow White back but finds that he has no choice. Other magical forces and a band of dwarves will also have something to say about this. Will Snow White and the Huntsman with their new friends be able to thwart the Queen’s plans once and for all? Stewart can also be seen in the new movie “On the Road” coming soon to theaters and in November in the final installment of “Twilight: Breaking Dawn (Part 2).

The Vampire Diaries - No one said love was easy especially when you’re in High School. Being a vampire is no picnic either. For Stefan (Paul Wesley) and Elena (Nina Dobrev), it hasn’t been an easy road. Dealing with magic, werewolves, and other vampires like Damon (Ian Somerhalder) can be a full time job. In the Season 3 opener, Stefan has just sacrificed his sanity and love for Elena to save Damon from a werewolf bite. Stefan is also working for Klaus (Joseph Morgan) who made him the way he is now. They are on the trail of a werewolf who have some answers to questions they have. Elena and Damon must put aside their differences to save Stefan. What will they do next? Seasons 1, 2, and 3 are on DVD in stores now. Also, Season 4 begins on the CW Thursday October 11.