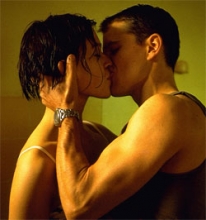 Who likes a good spy movie, gang? Now all of our Patrollers have seen a good spy movie now and then. The heroes in these movies have all worked for the government in some capacity. The Toddster decided to visit the secret place that is the Patrol vault and bring back some old favorites that are now available on Blu Ray.

The Bourne Identity - Heroes that get their start sometimes lose their way or here they forget their way. Jason Bourne (Matt Damon) worked for a secret Government operation behind the scenes that kept the World’s evil at a minimum. His last mission to take out a corrupt leader went wrong. He’s wounded and left for dead. Found by a fishing trawler, Jason’s memory is gone. Following a series of clues and aided by his new friend Marie (Franka Potente), he may have found the pieces he’s looking for to put it all together. Unfortunately, the people behind him don’t want him to find out. Can Jason put it all together?

The Rock - Stanley Goodspeed (Nicholas Cage) worked in a lab as a chemical weapons expert but didn’t get out in the field too much. He’s about to get all the action he wants. Not until a former general (Ed Harris) seizes control of Alcatraz Island in San Francisco and takes hostages. The general also has a series of chemical rockets that he’ll launch if his demands are met. Now only Stanley and a former British Operative (Sean Connery) who escaped from Alcatraz have a chance of getting to take out the terrorists. Will Stanley and his new partner have a chance to save the hostages?

Next - We all get stuck with things we don’t want. Cris Johnson (Nicholas Cage) keeps off the grid as much as he can. Cris has the ability to see 2 minutes into the future. FBI Agent Callie Farris (Julianne Moore) thinks recruiting Cris to find out where a nuclear weapon is hidden is a good idea. Cris doesn’t think so and he does all he can to stay out of their reach. Cris meets a pretty teacher (Jessica Biel) who he was able to see as a part of his future. She gets kidnapped and now Cris has no choice but to help. Is Cris going to be able to save the city and his girl too?

The do’s and don’ts of charitable giving