Chenango In The Civil War: The Men Of Guilford
Published: January 24th, 2012
By: Wilma Felton-Gray 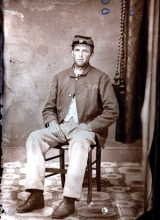 Editor’s Note: In conjunction with the Chenango County Civil War Commemoration Project Team, The Evening Sun will present a monthly series chronicling items of local interest during the war between the states, compiled and written by a number of local history enthusiasts.

Imagine a day, a day hot sticky and humid, in the month of July. There is a field, in the valley, that usually you are able to clearly view over twenty miles around. Now, it’s clouded thick with smoke and you can hardly able to see your hand in front of your face. You smell the odors of sulfur from gun and … cannon smoke. You think this must be hell. A few hours later as the haze begins to clear, you hear in the distance a few pops of gun fire but, prominently you hear the moans, the moans of the dying and wounded soldiers and then you see the bodies. The bodies strewn across the valley of both the North and the South. This is probably what Abraham Lincoln knew when he wrote the Gettysburg Address. Abe knew of that battle scene as he stood on the very same ground and delivered that infamous speech.

Many wars have been fought through the years but none as devastating as the Civil War. This war took more lives than any other war. A war, on our own land, that pitted at times, brother against brother, families against families. So many lost their lives in battle and if they survived, after the war from injuries received in battle. If they survived and came home many suffered from what is called today as post-traumatic stress syndrome.

Members of the Guilford Historical Society have been researching and collecting information about our local soldiers for the whole Township of Guilford. It proved difficult to find them. Difficult as many did not enlist in their home town. The reasons being:

a.) they may have had friends or family enlisting there.

b.) they may have been drafted later.

c.) Enlisted in a regiment they were more attracted to for reasons of friends, greater bounty money paid, and even uniforms, artillery versus calvary.

f.) They were not given or allowed a pension as they were deemed a deserter. Men that were taken prisoner, on either side, were often given the choice of fighting for the other side rather than risk starving to death or dying of disease in the severely overcrowded prisons. Many refused but those that did, after the war, didn’t talk about it and were ashamed. Some even changed their names by changing the spelling, taking their middle name for the first name, or completely changing their whole names.

g.) Some were claimed to have deserted even though they were wounded and sent to a hospital to recover. Some may have died in battle and his widow could not draw a widow’s pension as he was proclaimed a deserter.

From 1861 to 1865, 630,000 casualties occurred out of the 31 million men who either were drafted or volunteered. Sixteen percent of the soldiers from the North died. Twenty-five percent of the soldiers from the South died. More men served from New York than any other state, with new York playing a major role in the war. 480,000 men came from the State of New York, one quarter the Union Army.

Of that figure, at present, 247 soldiers have been discovered with a connection to Guilford. They were born here, moved here, enlisted here, died here and/or buried here, or died here and buried someplace else. There are at least 76 soldiers buried in Guilford Cemeteries. Ten soldiers were taken prisoner and 6 died in prison. Andersonville, Libby and Salisbury were the names of the camps where those Guilford soldiers were taken. At least 46 Guilford men died of disease, chronic dysentery, consumption and typhoid were the main causes. The majority of the men were in the 114th regiment, 161st, 5th heavy artillery, the 8th, and 10th Calvary.

There were a few in the 89th, known as Dickinson’s Guards. A newspaper clipping dated around the mid 1920s told of the correspondent noticing two uniforms airing out on a clothesline, side by side – one blue and one gray. The uniforms had belonged to George W. Baldwin of the 89th NY and his brother Walter. This was the man that was written about in this paper last month that served in the Confederate Army researched by Sharon Donahe.

Other facts include: Fifteen men came home wounded. There were six proclaimed deserters and at least 13 Guilford men killed in action. The first to enlist was Alvah Warner of East Guilford in the 114th. One man, Leonard McGill of Guilford was the only colored soldier, as the term was listed in the 1890 census.

From pension files and records we found many of our men, as with all wars, battle fatigued and with mental conditions. Some in ill health, missing limbs, balls and shrapnel still embedded in their bodies. This war was not like any war fought. It was American against American, relative against relative, brother versus brother. We fought each other over the individual beliefs of the time and for the rights and freedoms of others and in some areas this war, 150 years later, is a war still being fought.

Guilford Historical Society member Bruce Scott has done extensive research, from which the statistical information in this article was obtained. As a result of this enormous undertaking, he has produced a book that has a great deal of information on each soldier that walked on the soils of the Township of Guilford. GHS hopes to have this book published soon and available to purchase.

The research we have done is only for our community. I challenge each historian and/or historical society to do some research on the men that served from your communities in the Civil War as the next three years marks the Sesquicentennial of that war. There is also a committee that meets once a month in different Chenango County communities to plan and organize commemorated events of those townships. Participants are needed from the Northern most towns of the County. Contact Nancy Bromley of Greene if interested.

So today, we honor many of those who fought in more recent wars on Memorial and Veterans Day, those deceased and those who are still with us and perhaps just returned from overseas. For the deceased we place wreaths and flowers in cemeteries and on memorials … and in Guilford, we have a parade ... and a service where we tell yours and their stories ... sponsored by the Guilford Fire Department and a Veterans reception at the Methodist Church directly after that service organized by GHS. This past year, the parade and ceremony included father and son Civil War re-enactors as a tribute to those “Guilford Men in the Civil War.”