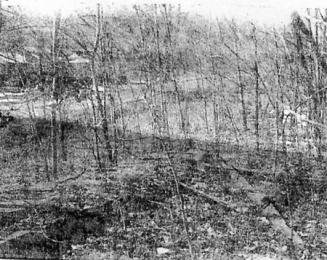 Two weeks ago the article written was the “Trestle School” which still stands, very much different that the photo that accompanied the article, located on County Road 35 from Guilford to Sidney. After a brief vacation (Thanksgiving holiday) we again return to the same area of the Township of Guilford and travel a short distance down County Road 35 less than a mile to the “Ives Settlement Road.” Making a right hand turn on this road travel approximately two-three miles and you will come to a settlement of farms. This is Ives Settlement! The photo that accompanies this article shows what was then the remains of the Ives Settlement schoolhouse when the photo was taken. This writer apologizes for the quality, but it a copy from a copy, which is not the best situation to deal with. If my information is correct, and I will stand corrected I am sure if I am incorrect, the former site of this school was just east of the Ives Family Cemetery.

As everyone who has attended school, whether is a one-room, two-room, elementary, village or large city school the following poem is true to all students who spent twelve years in the educational bastions for “read’n, write’n, arithmetic, and on to the higher education.

“The school is such a lovely place

And we wish it no hard luck

But just for fun. and a very small sum

We’d cart it away in a truck.”

This a appeared as what is now known as graffiti from an unknown early school. This writer is sure the majority of readers will agree with the above, especially in a lovely early spring day with sunshine, warm weather and we were all stuck in classroom!

Ives Settlement was first settled by Lyman Ives and his brother Samuel in the approximate time frame of the late 1790s. Their descendants still live in the area. The farm was located on a fairly steep hill (has not changed) southwest of Guilford. Located due west of the Parker (so designated by the railroad) and in approximately 1800 Lyman Ives erected the first recorded schoolhouse in the Guilford area. Bear in mind at the above date Guilford was still a part of the Oxford Township and was known as Fayette. After the completion of the school, Lyman Ives continued to teach there for three years.

This first schoolhouse was an extremely crude structure, being constructed of stone with the roof rafters being squared off logs and a thatch roof. An extremely crude fireplace, which was extremely drafty, was the only heat for the structure. Furniture consisted of squared off logs and rough planks on stumps for sawhorses. If Mr. Ives had a desk it was probably constructed of a broad plank set on rough, hand hewn logs. In this early day, textbooks were unheard of and the Bible was the reading and spelling book, serving as well as a recitation book and religious text. An interesting note at this time, how would an educator cope with these primitive educational tools, especially in view of the fact, don’t mix religion and education in schools. Needless to say attending school at this time was not a pleasant enjoyable experience, either for scholars or teachers, that are endured in Central New York State, winter winds howl, we have wet spring rains, early summer floods, and scholars were required to study and recite lessons wrapped up in their heavy winter coats and hats ad it was an absolute impossibility to heat the schoolroom. Keeping the candles lit was a never ending chore and when oil lamps were finally used, even they flickered and at times blew out.

As time progressed and the continual upkeep and maintenance was becoming a major problem, the subject of a new schoolhouse being erected came up. This was not without bitter arguments (has that changed?) and as has been and still is the money for the actual construction. Did the public want to pay for a new structure with public funds? $450 to build a new school – OUTRAGEOUS! Money was scarce (what’s new) and this huge amount equaled two years labor by a competent working man! Who ever heard of such a thing? The possibility of making the old building wind-tight. No way!

NORWICH – The Norwich High School recently announced that it will temporarily move to remote learning until January 20 due ..
January 11th