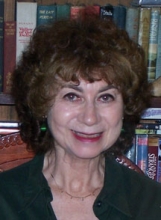 So there I was, sitting at home on my computer, minding my own business, when I got a terse email from my brother-in-law. It said, “Don’t worry. We’re all right, but look at this,” and it provided a link to a Los Angeles television newscast.

I thought, while the video uploaded, “What can it be?” Was Fred arrested on a tennis court for lobbing a ball through the open window of a Mercedes and thwonking a movie producer on the head? Was Selma receiving a medal of honor for taking the unpopular stance as a museum director that artwork stolen by Nazis from their murdered victims should be returned to the rightful heirs?

Finally ... finally, the newscast finished loading, and I hit, “Play.”

To quote my sister, Linda, after she watched the video, “Oh, my God!” To quote myself after I viewed it, “Good grief!”

Now I’ll tell you what happened.

At a little before 10 o’clock on Sunday night, Selma and Fred were driving home from a dinner party on Figaroa, a tree-lined side street that they had taken uneventfully many times in the past. Suddenly, Selma heard a noise loud enough to signify that the doomsayers were right, and the world really was ending, and she felt a sensation “like a tornado coming.”