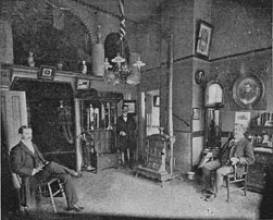 OXFORD – If you’re like most people, the thought of hearing about funerals makes you squirm a little bit. It’s usually an uncomfortable subject, unless it’s being talked about by Oxford’s Steve Behe. Steve, who took over Behe Funeral Home from his father, Judson Behe, has been a funeral director for forty-two years. The business, under the Behe name, has been around for five decades, and over that time Steve has amassed a wealth of information, stories, lore and even some humor which he has gathered up into a program that is sure to enlighten and entertain. The History of Cemeteries and Funerals will be presented by Behe tonight at 7 p.m. at the Oxford Historical Society Depot-Museum. A short OHS business meeting will precede the program.

Over the years of being in the funereal business, Behe has learned a lot about its history. He’s dug up the past on the origins of embalming, Civil War practices, and how embalming has evolved. Steve will be sharing this, along with general funereal facts and entertaining anecdotes of those he has laid to rest and some unusual requests. He will also disclose some local details about the cemeteries in Oxford and some notable burials.