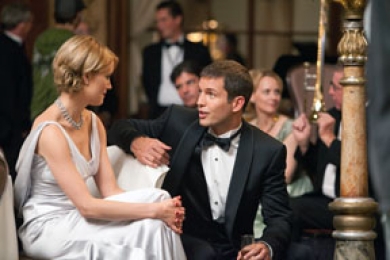 I’ll start at the end, after the credits begin to scroll down the screen. When the lights in the theater are coming back on, and we know that the movie is over. I looked at my friends. They looked at me. We all had tears in our eyes. I felt as if I were in a quiet room where a shotgun had just gone off.

The shotgun was Dagny Taggart’s scream.

I was dumbstruck. I still am.

I don’t know where this movie came from. I didn’t see it advertised. I didn’t hear any scuttlebutt. A friend of mine in Oregon emailed me, “Did you see the movie Atlas Shrugged yet?” Duh? Huh? Movie?

And then … magically, fifty-four years after the words “Who is John Galt” were first revealed to rapt readers, this film materialized out of nowhere, like Athena, the Greek goddess of war and wisdom who leaped from Zeus’s head, fully grown and fully armed.

Appropriate, because this movie is as much a war cry as it is a gut-wrenching cry for wisdom.

Like millions of others, I read Atlas Shrugged when I was a teenager. The premise of the novel is straightforward: That humanity’s benefits are bestowed upon us by the world’s creators (artists, industrialists, scientists, etc.); that these creative individuals are being enslaved by our collectivist laws and mentality; and that the country would fall to ruin if the creators went on strike.

Over the years, this elegantly simple and completely original storyline has become obscured by the personality of the woman who wrote it: Ayn Rand’s life. Her loves. The acolytes who surrounded her. Her friends. Her enemies. Her joy. Her wrath.

Bla. Bla. Bla. It’s all drivel, and none of it matters.

All that matters are her ideas, her story, her book, and … what promises to be a thrilling series of films being made from that book.

Part I of Atlas Shrugged, the movie, is an exhilarating success (Yes. I know that some of the acting by some of the characters is less than spectacular, but Cate Blancett won an Academy Award for playing Katharine Hepburn in what was the worst performance in the history of the cinema – so who’s counting?)

First, let me tell you about Grant Bowler. He plays Hank Reardon, the inventor of Reardon metal, and I am in love with him. He has a quiet, self-assured, undercurrent of boilingly-passionate masculinity that made me stop and think: Oh. Right. That’s what men are supposed to be like. I forgot.

Then there is Taylor Schilling. Taylor who? Well, it doesn’t matter if we never heard of her, because she is perfect as railroad magnate Dagny Taggart. Everything from her long legs, her spiky high heels, her slim skirts, her fine cut features, and her determination to save her company by repairing its deteriorating lines with tracks made of Reardon metal – it is all right on the money.

Which introduces the plot elements covered in this movie: Dagny … meet Hank. Hank … meet Dagny. Two spiritual and intellectual giants under attack by an army of pygmies. Dagny struggles against her stupid brother and his politically connected friends. Hank endures his family’s contempt for his “selfishness” (as they blithely ravage his bank account). Their eyes meet. Their brains meet. The sexual tension starts to percolate.

Meanwhile, Hank is pouring metal for Dagny’s rails and both are wondering why all of the purposeful, independent, and productive people in the country have begun to disappear. As hopelessness and poverty become more and more prevalent, an oft-repeated phrase becomes a national anthem of despair: “Who is John Galt?”

In defiance of that despair, Dagny names her new railroad The John Galt Line.

I’ll tell you just two more things before I run out of space.

One: The highpoint of this movie is when Dagny’s train is speeding along at 250 mph past a spectacular Colorado countryside over the new rails that she and Hank Reardon built. Then the train races through the exquisite, almost delicate bridges designed by Hank Reardon and made out of Reardon metal, and it felt as if everybody in the audience wanted to stand up and cheer.

Two: The book on which this movie is based is 1,168 pages long. So, you had better start to read it now.

In the meantime, see the movie. Watching film stars unapologetically play unapologetic heroes, without having to resort to Turner Classic Movies, is an unprecedented pleasure.

Larger than Life is out there. Available. For a limited time only.

Grab it while you can.

Shelly Reuben has been nominated for Edgar, Prometheus, and Falcon awards. She is an author, private detective, and fire investigator. For more about her books, visit www.shellyreuben.com.