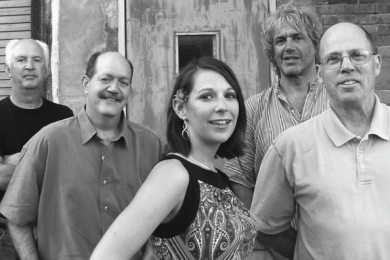 OXFORD – Friday, June 25, at 7:30 p.m., 6 On The Square (6OTS) is celebrating their 3rd anniversary featuring everybody’s favorite local band, Thistle Dew. Thistle Dew is Jes Sheldon, lead vocals, accompanied by some very accomplished musicians. Bob Tousignant on percussion, Eric Porter on acoustic guitar, Jimmy John Kolet on electric bass, and Mike O’Connor on keyboard and vocals. With all this talent in one band, Thistle Dew is bound to please.

Jes’s forté is in poignant renditions of old torch song ballads and jazz standards and she is not afraid to belt them out! Her wide vocal range allows her to choose songs from many genres, including jazz, rock, blues and soul, and anything else that tickles her fancy. Once you hear her sing her version of “Fever” you’ll be hooked for the night!

Hall of Famer, Robert Tousignant began playing trap set at the age of 12 and has been playing with many groups since then. His band, The Music Explosion, was inducted into the Rock and Roll Hall of Fame in Cleveland, Ohio. Jim Kolet played his first live performance when he was 15. Throughout his professional career he has had the pleasure of performing with many great musicians including singer/songwriter Carol King and folk singer Jamie Brockett. Together Eric, Robert and Jim performed as the Eric Porter Trio at the Council of the Arts’ Chenango Guitar Heroes benefit concert.