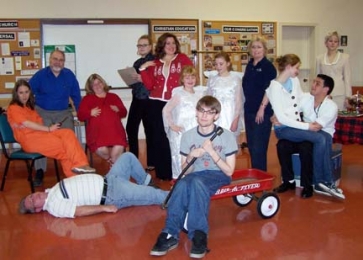 NORWICH – The Chenango Community Players (CCP) are currently in production for the new comedy, Christmas Belles. Debuting in 2006, ‘Belles’ was authored, in a true Southern flavor, by Jessie Jones, Nicholas Hope, and Jamie Wooten. Under the direction of Richard Heim, with Assistant director Mike McCollough, it will be performed Friday and Saturday at the Chenango County Council of the Arts’ Martin W. Kappel Theatre in Norwich. This side-splitting, cataclysmic comedy, is a must see… especially with the holidays upon us!

The basic plot of Christmas Belles, involves three squabbling sisters (the Southern belles) in Fayro, Texas, who are trying to reign in the mayhem from a church Christmas pageant (to be aired on live cable TV), that has spun wildly out of control. Amidst the chaotic goings-on, a family secret emerges that just might derail the entire production.

The Chenango Community Players, located in Norwich, are a non-profit, community-based theater group with volunteers from Oxford, Norwich and the area. For over 30 years they’ve committed to bringing high-quality performing arts to Chenango County. Some CCP past productions include: Annie, Oliver, and The Sound of Music. Most recently they staged Harvey, directed by Fred Dankart, and Noises Off, directed by Richard Heim and Cathy Robinson. Reprising his adept hand at directing slap-stick comedy is Rich Heim.