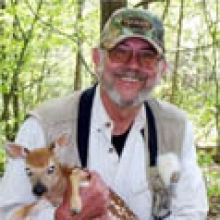 Who said Mother Nature doesn't have a sense of humor? On the heels of unseasonably frigid weather just a few days ago, she played her annual April Fool's joke on opening day trout anglers by whisking in 60-degree temperatures. The hole card she played, however, was that the stream water temperatures were more February-like and water levels were so high any bait or lure lowered into the current was swept by hungry trout so fast that the fish probably thought they was hallucinating.

Did I mention the wind? Gusts were so strong that unless anglers added a quarter pound of sinkers, the wind might blow the line and bait right out of the water. I'd hazard a guess that it also raised havoc with anglers trying to fish the smaller, brush-lined brook trout streams where the technique often involves merely swinging and then dropping the bait into openings over the water.

There was a time when I was young and foolish (well, maybe young and more energetic) that nothing could keep me off the trout streams on opening day. Probably the Postal Service could have used me then, because neither rain nor sleet nor snow nor gloom could keep me from my appointed destination with the trout. Did the trout care? Most years, they certainly didn't seem to fully appreciate the sacrifice I was making to meet them, ungrateful creatures that they are.