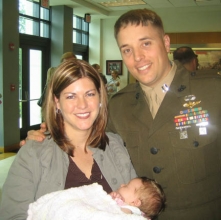 Jamie Bancroft graduated from Oxford Academy in 1992 knowing he wanted to become a pilot. In doing so, he began his education at the United States Naval Academy.

While at the academy, Bancroft said he played light-weight football. Although the games were not like the Army/Navy games seen on television, he said he played a smaller version of it and had a lot of fun.

After completing Naval school, which Bancroft notes was a difficult task, he was commissioned into the U.S. Marine Corps as a second lieutenant.

“There were 1,200 inducted, and I graduated with about 850,” he said. Following completion, Bancroft was on his way to basic officer training and stationed in Quantico, Va. for six months. During this time, he also met his wife, Amy.

Joining the military, he remembers, was a way to serve the country he believes in and to follow in the footsteps of his family.

“My father and uncle both served in Vietnam,” he said. “The military was a stepping stone for me so I could figure out what I wanted to do.”

Once this pilot earned his wings at flight school in Pensacola, Fla., he was certified to fly UH-1N Hueys.

By the late 1990s, he received orders from Camp Pendleton to fly. In the years that followed, with the United States’ decision to invade Iraq, he would receive deployment orders on four occasions. Bancroft was deployed during Operation Enduring Freedom and again during Operation Iraqi Freedom.

His first deployment sent him to Okinawa, Japan for eight months and his last deployments consisted of travels into Iraq and its surrounding areas, spending as long as 18 months away from the United States.

“I went to Iraq in the beginning, right after the invasion, again in 2005 and again in 2007,” he said. This solider, like many, saw that country at its worst and slowly sees it improving in the time since U.S. soldiers have occupied Iraq soil.