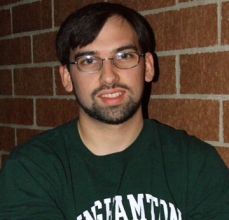 While many artistically-inclined young people seek the spotlight, others would rather turn it on from back stage.

Matt Grenier, a 2005 Norwich graduate, was born in Plattsburg. His father, a member of the Air Force, was stationed at numerous places during Grenier’s younger days. Grenier explains he has lived in England, Maryland, Florida and following his father’s retirement moved to where some of their family was located – to Norwich.

Grenier was in sixth grade when his family settled in Norwich and no sooner than he arrived, he says he started getting involved in the local theater under the direction of the late Martin Kappel. Grenier’s talents rested behind the stage rather than on it, he says. “Martin Kappel taught me all about lighting design and the aspects of running everything behind the scenes,” said Grenier.

Grenier joined the musical club in high school, also under the guidance of Kappel, took part in field band and was part of the FIRST robotics team for four years. “I was not experienced in music at all,” he said, “I just walked in and learned bass drum.” In time, Grenier performed the lighting design for Amber Perkins’ recitals and all the high school musicals.

Concentrating on the design aspect following graduation, Matt enrolled at Fredonia University to study lighting design. After a short time he realized he wanted to take his studies in a different direction. He explains his first year at Fredonia was a challenging one. Grenier transferred his studies to Binghamton University where he started to focus on the technical side of the theater through mechanical engineering with a minor in theater. He became the technical director at the Arts Council and began to work with the performers who use the theater, now named for his mentor, Martin Kappel. “I make sure the performers have the equipment they need and focus on the technical aspect of each performances,” said Grenier.