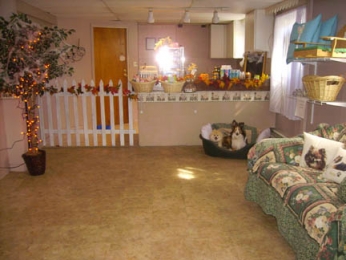 NORWICH – When you say that a business has gone to the dogs, it generally has a negative connotation. But what if the business started with the dogs in the first place?

That’s exactly what Tracy Pond did when she came to Chenango County about a year ago to open Beautying the Beast, a doggy day spa located on Rt. 12 just north of Norwich. “I’ve worked around dogs my entire life,” Pond said, rattling of her various jobs as a veterinary assistant, kennel manager and dog groomer.

But when she moved from Long Island to Chenango County to open her own business, Pond didn’t want to mimic the atmospheres she’d been working in. “I’ve worked in so many places that were just chaotic,” Pond said, describing groomers who went from dog to dog “in an assembly line manner. They weren’t really giving any one-on-one attention to the animals.”

That’s exactly what Pond wanted to avoid when she opened Beautying the Beast. There’s no assembly line here; in fact, there’s usually never more than one dog at a time on premises. “I wanted to do everything differently,” she said. “That’s why we’re all about the spa treatment here.” Offering pet massages, hot oil treatments, aromatherapy and even “pawdicures” in addition to the traditional bathing and grooming, Pond’s list of canine services reads almost like the human counterparts found at a top-end day spa.