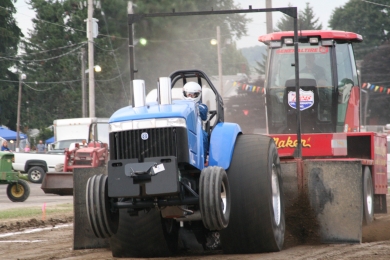 NORWICH – The carnival rides laid still and wet as the last of the morning dew began to fade. In the distance the roar of some great beast called “Tractor” rang out as it competed for dominance with others of its species. A few lone figures stirred in the corners of the scenery preparing for the days events. It was 10 a.m. and I was at the fair.

I had heard tales of magic, courage and even that the dead roamed the grounds of the fair, my job was to see what truth, if any, could be found in any of these fairy tales.

I followed my gut to Wambold’s circus. Upon my arrival a man stepped forth. Chris Sellars is a knight. He travels from fairs and festivals around the East coast participating in renaissance festivals featuring as a joust and mock combat expert. “I cold pound my own armor and have a sword, horse and everything,” said Sellars. He travels with a troop during the early summer season. “It hurts when you have to fall off a horse, there really isn’t any good way to do it but hopefully after you hit the ground you won’t be too hurt to keep fighting with your sword,” said Sellars. Sellars has been traveling with the circus for the last few months doing odd jobs. “I’ll sell cotton candy, drinks, help move things in and out, whatever they really need me to do,” he said.