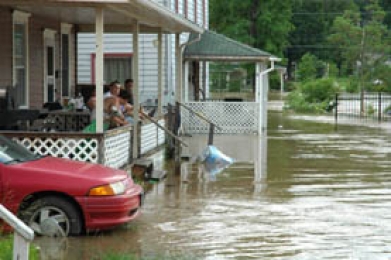 In August 2005, retired Norwich fireman Richard Utter listened to voices over his short-wave radio describe the devastation as Hurricane Katrina swept through New Orleans and the Gulf Coast.

Less than a year later, he and his wife Clara thought of the troubling broadcasts while they were being evacuated from the Mead’s Pond Mobile Home Park in a bucket loader as flood waters surrounded their home.

“We only had a little bit of what those people went through,” said Clara, referring to the Katrina victims. “But that was enough for us – it must have been horrible for them.”

The flooding June 27-28 hit some harder than others. Located at water’s edge, the Utters’ home received minimal damage – water rose within two inches of the floor inside their trailer – while seven others in the park were destroyed. Richard admits they were lucky.

Salon owner Michael Steward, whose home and business in Woods Corners was ravaged by high waters last June as well as in April 2005, was not as lucky.

“It’s just been a real hard struggle,” said Steward who, in total since April 2005, has spent nearly a year living and running his shop Shear Dimensions out of temporary spaces due to heavy flood damage. “The rebuilding process still isn’t done.”

Last summer several feet of mud and water filled his property across from Procter & Gamble, causing over $200,000 worth of damage, $50,000 of which was not covered by insurance. Living out of a camper well into the winter, it was six months before Steward could begin moving his belongings back home. Through loans, grants and refinancing he has been able to produce enough capital to rebuild and remodel, and today, for the most part, the damage is unnoticeable. Even so, the rebound has done little to relieve the fears of another disaster.

“The problem will always be in the back in your mind,” Steward said. “Everything is uncertain. Nothing is normal anymore. Everything is so extreme. And if it were to happen a third time, I don’t know if I could survive it.”

Willard Court resident Donald McDowell doesn’t rule out another flood. But he hopes the removal of the Canasawacta Creek dam will allow debris to flow freely, preventing a back-up that he believes sent water rushing through his west end neighborhood.

McDowell has lived by the creek all his life, and didn’t expect Mother Nature’s affront last year.

“I thought we would get some water,” he said, recalling his response to the warning he received at around 11 p.m. on June 27. “The flood was a surprise.”

Across the street from McDowell, Josephine Stratton remembers backing her car into the current that had engulfed the small cul-de-sac.

“Water was splashing on the windshield,” she said, saying she got as far as the corner before she was stopped by emergency vehicles. “I’ll never forget it, they told me ‘be careful, if you see water bubbling up it’s an open manhole – don’t go down into it.’”

When Stratton returned home the next day, her basement had taken on 40 inches of water. She lost her washer and dryer for the second year in a row.

“No one can tell me I’m not up to date on my appliances,” she said with a laugh.

Clara Utter says the shock of seeing others face hardships has taken its toll on her.

“I’m still recovering from it,” she said. “It was such a shock – very depressing to see other people lose their trailers. That was terribly depressing.”

Today the Utters say the pond appears deeper at their end, and that there seem to be more squirrels and chipmunks (admitting they don’t know if it’s flood related). They are still reminded by the empty lots where there neighbors once lived.

The couple hopes a dike or levy system will someday be constructed on the other side of the nearby airport to prevent a future flood in their area. Regardless, Richard said the couple has no plans of leaving despite the threat.

“We wanted to get back as fast as we could to see what we had,” he said. “There’s no place like home. We’re just hoping it don’t happen again.”

Based on the help he received from the Federal Emergency Management Administration and what he sees as the lack of preventative measures since last June – like cleaning out fill and debris from the Chenango River – Steward is skeptical that government is willing to make a difference in disaster situations.

“You know there is no one there to help you,” he said.