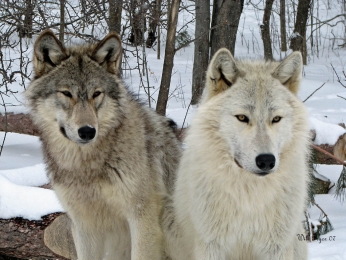 SMYRNA – The ancient call of the gray wolf has returned to the rolling hills of Smyrna. A pair of Mackenzie River Valley Alaskan Timber wolves reside at the new Wolf Mountain Nature Center Inc. The center, just opening its doors, is inviting the surrounding communities to see what they’re all about with an event July 7.

The non-profit center is approved by the New York State Education Department and is a federal and state licensed facility now providing educational programs about wolf behavior, history and the role of wolves and other predators in keeping a balance in the eco-system.

There is a great deal of misinformation and negative images associated with wolves, says wolf educator, Michelle Ying Ming Chan. The WMNC is in the development stages and currently has a small, knowledgeable staff. Staff members say a few dedicated volunteers to help with the many projects are always welcome.

Will Pryor, the director of the Nature Center, says taking on raising wolves was an interesting as well as an expensive venture. Pryor, an environmental scientist, says after visiting Wolf Park in Indiana he never second-guessed himself or his ideas of creating a nature center.

Pryor says he has envisioned the center, including working with wolves, for many years. “I used to dream about wolves, and now I am beginning to know why,” he said.

Raising two wolves – Natani and Nakoa – since they were puppies, Pryor says socializing the animals so people such as himself and other educators can work closely with them is one of the main goals. “They are very sociable and if one of them got hurt or they need something, I can go right in there are help them,” said Pryor.

Pryor keeps the wolves near his home in a large government-regulated enclosure. He says the fencing exceeds all regulations and the enclosure is wooded, spacious and provides the wolves a quality life. Pryor says keeping the pair happy and satisfied in their environment is important. “They are equipped with all the necessary items like being in the wild,” he said. “They are happy where they are, they like the interaction and attention from visitors. They can be themselves.”