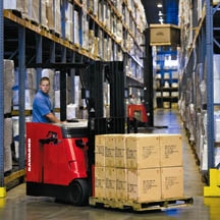 GREENE – The largest private employer in Chenango County, the Raymond Corporation, marked its 85th anniversary in the Village of Greene Saturday.

“The celebration went very we’ll. We had about 2,500 people show up for the open house,” said Raymond Marketing Specialist Charlotte K. O’Dea.

Matsuura presented a globe as a gift to The Raymond Corporation honoring the Raymond-Toyota relationship in celebration of it’s 85 years of success.

“We started out as a hometown company and crossed the country as we grew. Now we are becoming an increasingly international organization dedicated to surpassing the ever-rising standards that have defined our success a global company,” James J. Malvaso, president and CEO.

“Raymond is a great community neighbor and just recently helped us, both the corporation and the Raymond Foundation, made donations to our fire station. In the past they’ve helped raise money for several things, like playground equipment. The company has also encourage many of their suppliers to move into the area, such as Production Plastic and Salami Hydraulics and on top of that, they have out-sourced a lot of work out to local businesses, especially the local machine shops,” said Village of Greene Mayor Marcia E. Miller.