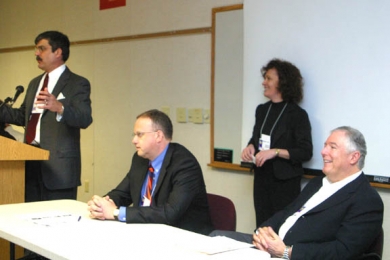 NORWICH – More than anything, it takes common sense and guts to be a successful entrepreneur, local business leaders say.

During a panel discussion Thursday at the 2007 Entrepreneur Forum in the Eaton Center, seven of the area’s more accomplished self-employed told a crowd of around 100 that honesty, hard work, and sacrifice are important, but not necessarily enough to make it on your own.

Dick Snyder, owner of Circulars Unlimited, seven Pennysavers, and The Evening Sun, said each panelist, while not the same, all had one common ingredient that’s integral in business.

“None of us are afraid of going broke,” Snyder said. “It just never comes in to play. If we lost it tomorrow, we’d just do something else.”

According to Richer Feeds President and CEO John Mitchell, seeking success rather than fearing failure was the mentality that helped him weather the tough spots running the company that’s been in his family for four generations.

“I didn’t have a fear of failure, I had a fear of not succeeding,” Mitchell said, admitting that his setbacks were ultimately invaluable lessons. “Hopefully you do it (fail) in small increments.”

The panelists agreed that those in search of easy money and entrepreneurs are not the same thing – in fact they are exact opposites.