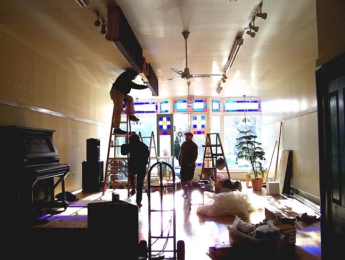 OXFORD – On the eve of the New Year, with bright sunlight streaming in through antique stained glass windows, Ken Millett, owner of the Night Eagle Café, came to finish moving out of his former location at 6 LaFayette Place. Several hearty volunteers were hard at work dismantling what was left of the nightspot. It’s part of the transition to their new location, at 200 State St. in Binghamton, where an informal covered dish, New Year’s Eve party was held.

Volunteers Robert and (songwriter) Jacqui Rayne, “Pine Cone” Fletcher, Barbara Vartanian, Steve Kopko, and John Knapp were there to lend a hand to pull out the sink, the fridge, the stage and the piano. Lighting fixtures, platforms, and soffits were all unscrewed and removed. The two big paper wasp nests were carefully hung so they too could relocate. After some touch-up painting and sweeping, it would all be over like a slate wiped clean.