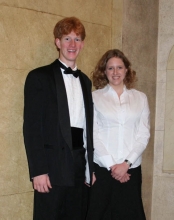 NORWICH – Two Norwich High School seniors got the chance to play and sing among the elite last weekend in a chance of a lifetime opportunity.

In May, Gabrielle Chwazik-Gee for chorus and Jared Nichols on tuba demonstrated their talents and abilities to compete for a chance to play among the most musically talented students from across the state. Each student had to play a solo piece at level six, the hardest level one could play.

Chwazik-Gee sang “Voichesapete” by Mozart and Nichols played “Sonata for Tuba” by Frackenpohl. The students were then picked for the NYSSMA All-State Conference from the high scores each received. As many as 15,000 students audition, and from that only about 900 are chosen.

Months later, these two seniors were on their way to Rochester to Eastman Theater at the Eastman School of Music. Over a four-day weekend, the students practiced and rehearsed endlessly in preparation for the concert that was held Sunday.