Norwich Police To Ex-officer: "You Are A Disgrace"
Published: August 25th, 2006
By: Jessica Lewis 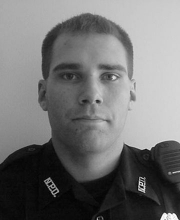 NORWICH – Former City of Norwich police officer Randouth L. Palmer, of County Road 19 in Preston, was sentenced to 1 and 1/3 to 4 years Thursday in Chenango County Court.

Palmer was charged with forgery in the second degree, and pleaded guilty to the charge on May 8. During his time as president of the Norwich Police Benevolent Association, Palmer allegedly stole over $53,000 from the group’s bank account.

Judge Michael E. Daly listened as the current President of the PBA, Scott Meade, read a statement to the court on behalf of all the members. Meade told Palmer he had broken the promises he made when he took his oath and broken the trust of his fellow officers.

“You didn’t just steal money from the PBA, you stole a piece of our reputation. The misconduct of one bad police officer, like yourself, stains us all,” Meade said.