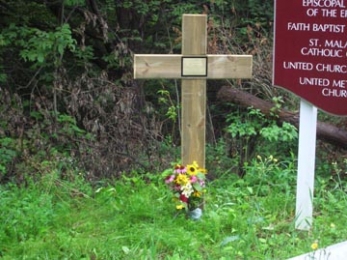 SHERBURNE – Saturday afternoon, bikers from New York, New Jersey, Pennsylvania, Indiana and California gathered to pay tribute to Richard Christie, a motorcycle enthusiast who was killed on July 1. Two motorcycle runs took place simultaneously to honor Christie; one in Sherburne at the site of the fatal crash, and one in Los Angeles.

Christie left his home for a morning ride on July 1 and never returned. He was hit by another cyclist who broke across the center line on Route 80. Christie, who lived with his mother on Rexford Street in Norwich, had been riding for two years. According to his fiancee, Kimberly Cox, he was always interested in anything with a motor, but Christie did not rush into things. He did a lot of research before buying his motorcycle.

During that time he became involved with the online biking community through the GS Twin website. Christie set up a frequently asked questions page, and quickly became friends with a number of people from the website – many of whom attended the memorial ride for Christie.

Some of the people Christie had met, but several only knew him from the message boards.

“He was the type of person who would treat you like his best friend, even if you only met him once,” one rider said.

NORWICH — During Tuesday's Common Council meeting, members of the Norwich Police Department were commended for their actions during an ..
June 16th

News from the Sherburne Public Library