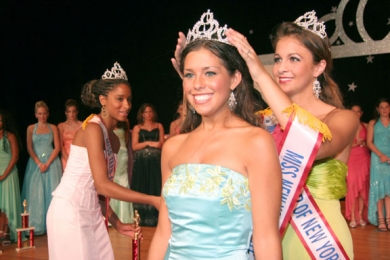 NORWICH – It was a day of beauty and grace Saturday as 32 contestants sought to win the title Miss New York State Teen-Ager 2006.

Teenage girls age 13-18 gathered in Norwich from 32 areas of the state to compete. Each girl held a local title and competed at the Norwich High School in hopes that they would be crowned on the state level.

The girls spent Friday rehearsing, learning steps, and practicing a choreographed number that would open the show. After rehearsing all day, the girls went on to give vigorous interviews with all three judges. The girls nervous and anxious seemed eager for the rehearsal to begin.

“It’s a great experience and it should be a lot of fun,” said contestant Amber LaPlant, Miss Tioga County while waiting to rehearse the steps and the walk for the bathing suit competition Friday.

All in matching outfits, the girls danced gracefully to the song “Where Dreams Begin.” Providing entertainment throughout times of intermission was the artistic dances of Ricky Schieffer.

The first series of judging was done for the bathing suit competition, directly followed by the evening gowns. The top 10 winners where announced and each girl in the top 10 had to give a one-minute speech. The girls chose topics such as teen abstinence, low self-esteem, their hopes, their dreams and their futures.

After the speeches, the show continued with the announcement of the top five, girls from the Genessee Area, Steuben County, Otsego County, Upstate NY area, and Greater Rochester area. Each of the five were asked a question and had to give an on the spot intelligent, poised, meticulous answer.

Organizer Shayna Jaycox explained to the girls before rehearsals even began that the pageant not only judges, beauty it judges the whole person – personality, poise, confidence, articulation, grace, and most of all it judges whether a girl is being herself.