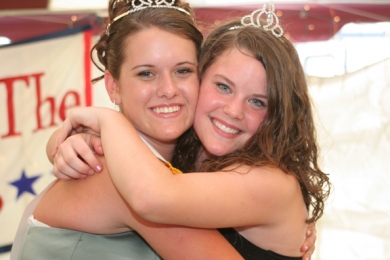 NORWICH – For “Pepe,” also known as Steve Schaffer, working at the fair is a salvation. The owner of Pepe’s Restaurant on 141 Washington St. in Binghamton, Schaffer normally works inside, serving a largely college-aged clientele. A long-time face at the Chenango County Fair, Schaffer said he uses the summer to cook in a new environment.

“I like it because I’m outside. It’s a good change of pace,” he said. With an oversized sign that has his business name on it, Schaffer has set up a clam and potato tent behind the Norwich grandstands each year for nearly a decade and a half. He sells a lot of chicken and clam meals, and being within 50 feet of the beer tent doesn’t hurt, he said. “With any luck, I’ll sell about 300-400 pounds of spiedies.”

Pepe’s is not the only familiar face at the county fair this year. For many, the early August show is a mainstay of their yearly plans. They are the people making food, parking the cars and pushing the race horses onto the track.

William Hatton’s arms are already brown for the year, but if the Norwich man needed a tan, he could have gotten it this week at the fair. Hatton has been working on the infield parking area at the fair for three years. His station provides no shade, and he puts in long hours.