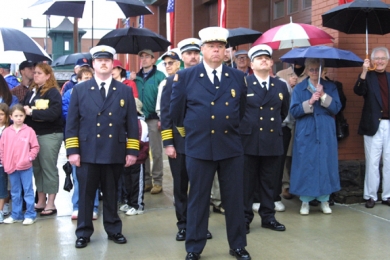 “Since I was 14 years old, I’ve never not had a job. It’s a little scary knowing I’ll wake up in the morning and not have one,” he said. That day has come, but on the last day of his six-and-a-half year tenure, he spoke about his experience in Norwich, the state of the department and the future of firefighting.

Tighe may have ended what was a 33-year career in the field this week, having spent the last leg of the journey as head of a department that boasts 20 paid workers, 15 of whom are full time, and more than 100 volunteers. He began his career in 1972 as a volunteer firefighter in the Village of Horseheads, and one of the first working disasters of his career was a major flood in the upstate municipality. The last major undertaking for his Norwich department was the record flooding this June. It started and ended with high water.

“It’s funny how messages are sent,” Tighe said. He cited his interest in spending more time with family and the recent loss of good friends as major reasons for his departure. In touching on his experience with the Norwich department, Tighe’s reign was one of change, growth and controversy.

CHENANGO COUNTY – After a tragic accident in Greene, a movement to allow blood products to be used on state ..
April 14th

NORWICH – After years of preparation and planning, Catholitic Charities has successfully completed a million dollar project in the Town ..
April 15th