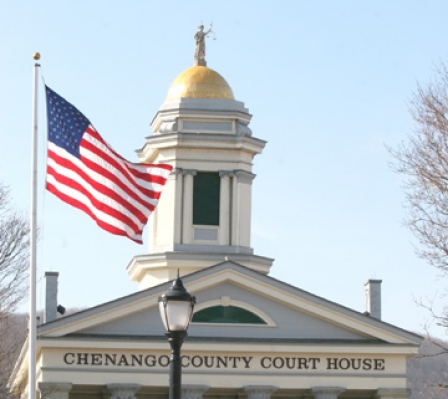 NORWICH – At times demanding the judge rule in his favor, defense attorney Randel Scharf argued in County Court Thursday that charges against his client, Tammie Van Deusen, be dropped due to what he called an inappropriate deal brokered between Van Deusen’s former lawyer and District Attorney Joseph A. McBride.

Scharf asserted to County Judge W. Howard Sullivan that Van Deusen was given poor legal representation by Binghamton lawyer Jon Blechman following the July, 2000 murder of Norwich man Edward Pastore Jr. He argued that his client was never told that she had a lawyer or that a grand jury was convening to rule on the murder charge and other charges facing her.

Scharf said his client’s charges were settled in a plea by McBride and Blechman, with little input given to Van Deusen. “She didn’t even know she had a lawyer,” Scharf said.

The former Masonville woman had her plea thrown out recently by the state court of appeals after nearly all of her 8-year sentence had been served. The court ruled that she was not made aware that she was subject to post-release supervision. McBride told Scharf Thursday that he wasn’t sure if any deals were still on the table, because Van Deusen didn’t testify against her co-defendant as her original plea required. She appealed her sentence, which was also against the rules her plea deal. He said he was willing to take the issue to trial if need be. Scharf attacked McBride’s motives.