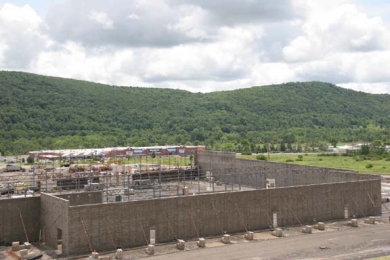 • Stephen E. Stark said he has “paused” his plans to build a $62 million, 2000-acre resort and hotel complex upon the eastern slope of East River Road overlooking the county’s seat. The developer reported last week that New York Regional Interconnect, Inc.’s power line project has “devastated” his fundraising capabilities. He currently spends only 5 percent of his time on Alteren.

• Stark announced his huge economic investment in the Town of Norwich back in 2003 with set a 2004 groundbreaking date. Today, the development “could be years” away, he said.

• Inclement weather has prevented road workers from applying the top course of pavement down on county Route 32, Project Engineer Larry Shaw said. The project is nearly a month behind the most recent schedule.

• Once paving is completed, crews can move onto blacktopping the approximately 50 driveways affected by the road enhancement project.

• The project is the second phase of an $8 million undertaking to upgrade county Route 32. Phase I upgraded Route 32 from the Dan Main Road north to state Route 23, and ended in September 2003.

NORWICH – A family in Norwich is getting a new roof for free this week, and it was made possible ..
January 20th

Tom Morrone, one of Chenango County's most influential political voices of a generation, passes away

CHENANGO COUNTY – One of the most influential political voices in Chenango County for the last four decades, Republican Party ..
January 18th

Biden to sign virus measures, requires mask use to travel