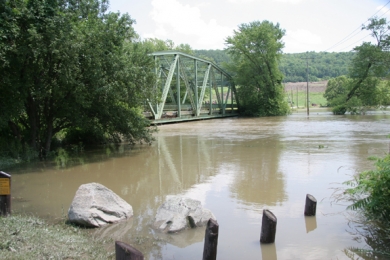 NORWICH – There is still a state of emergency in Chenango County, but residents have seen the worst of the 2006 flood.

City of Norwich Emergency Management Director A. Wesley Jones said 26 crews from outside the county are working with area fire and rescue crews to pump basements. With so many helping hands, the list of 235 city basements in need of drying out should be finished quickly.

“First thing this morning we opened up East Main Street and Barnes Street,” Jones said. Some of the streets like Grove Avenue are going to remain closed to help facilitate crews.” The county still remains in a state of emergency, but travel on public roads is allowed and most businesses are open again.

The flood developed late Tuesday night in the city as the Canasawacta Creek exceeded its banks in a flash flood. The waters quickly rose across much of the west and south sides of the city, filling a number of basements as far east as Broad Street. Before the night was over, the south side was under 3 feet of water and an emergency shelter had to be moved because the flood was coming in the back door.