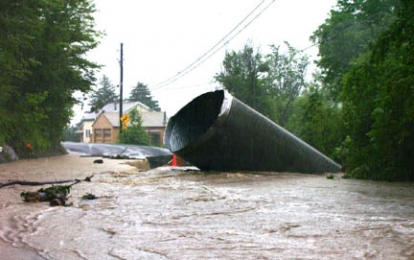 NORWICH – Flash flood waters from the Canasawacta Creek reached Broad Street Tuesday night, and only receded as the Chenango River on the other side of the city broached flood stage. The flood of 2006 is developing on two fronts, closing streets and bogging-down homes everywhere but the center of the city.

Waters poured down Canasawacta Street late Tuesday in what many are calling the worst flooding to the west side ever. Side streets were soon submerged, “curb to curb,” Emergency Management Director A. Wesley Jones said, and many homes became islands in the muddy run-off. Flooding to the south side of the city submerged streets under 3 feet of water, and more than a third of city roadways were soon shut down. As the water continued to rise, an emergency shelter at the First Baptist Church on West Park Place was, itself, evacuated after early morning water poured in the back door.

“This is significantly worse than the record flood we experienced just last April,” Jones said. “We’ve been advised by the National Weather Service to expect the worst case scenario.” The Evening Sun has received a number of unconfirmed reports that the flooding resulted in a fatality on county Route 34 early this morning.